Has my pet been bitten by a Red Back spider?

“DUNNY SPIDER” – Only the female is dangerous

Every year we are presented with dogs and cats who show signs of spider bite – there is no way pf proving this as we cannot ask the animal if it has been bitten or not and if so- by what. Actually, you can ask the animal but to date I have never received an answer yet that helps me.

One of the most common spider bites in Australia is the Red Back Spider. For those of you that want the scientific name it’s ‘Latrodectus mactans hasselti’ (try saying that name next time you’re having a few ‘quiet’ ales to impress your friends!).

Only the female spider is dangerous as the male spider has small mouthparts that do not penetrate the normal skin on animals.

This spider mainly becomes aggressive when it’s personal space is invaded or it is being attacked by the animal. It will usually avoid confrontation and if disturbed it will often fall to the ground and pretend to be dead. 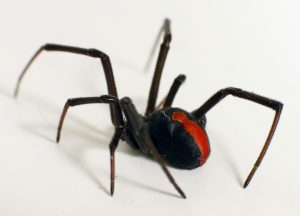 They love lurking in dark places such as the old country toilets – in fact, 20% of human cases were associated with the old ‘dunny’ about 20 years ago when the countries population mainly had outside toilets.

The venom attacks the nerve fibers at their ends. Initially the bite area can be painful but usually, within an hour or so the area stops hurting. Pain in other areas of the body may then start and this pain may appear to move. This pain is usually to touch so that the animal may become sensative to touching different parts of the body.

The animal usually looks miserable for a few hours or days and then appears to recover fully.

Some animals can start vomiting but most just show this hypersensativity over the body and appear to be distressed and depressed. There is never any swelling  in sight of where the bite occured.

In my experience the Red Back spider does not cause the trouble with animals as much as they do with humans. Mainly because most animals leave the spider alone. In fact a lot of the human contacts have occured when the person is trying to kill the spider or when they are putting on their boots which have been left outside and the spider has made the boot (or shoe) it’s home.