Noise or Storm Phobia? Does Your Dog Panic During Storms?

The night sky is lit with the flashes of lightening, the night is deafened by the roar of thunder and the ground is soaked by the drenching rain. There are some dogs who will stand outside and bark and howl at the wind and the noise, and then there are the sensible dogs who will find shelter and lie in warm dry area while they wait for the storm to pass, but there is a small percentage of dogs who are living their own form of hell. 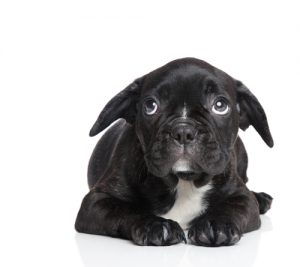 Within these dogs are chemicals and nervous messages surging throughout their body which cause the animal to go into what is commonly called the “fight or flight” syndrome. The adrenalin level is very high, their eyes are dilated, the heart is beating very fast, they are panting, often they have evacuated their bowels and their bladder, the blood is rushing to the muscles as the body prepares for flight – to run and hide from the thing that frightens them. Sadly some of these dogs will tear through fences, will bite and destroy wire gates, will hit themselves against closed doors and if they can – they will run and run from the storm.

These dogs are undergoing a phobia – an uncontrolled panic condition that literally turn off the frontal part of the brain (the thinking area) and makes them want to do supernormal activities to escape from the stimulus that is causing the condition – the noise, the lightening, the lower atmospheric pressure.

The first thing the owner needs to understand is that the dog has NO control over the development and the intensity of the condition. This is NOT an act and the animal gets no reward from being afraid and entering the phobic condition.

Discipline will NOT work and will make it worse – this is not the time to yell at your dog, or to use any form of punishment. Your dog is already afraid – more averse punishment will only worsen the condition.

Ignoring the condition does NOT make it go away. Pretending the dog is not anxious, not afraid, not in the panic mode does not make it better. Again I repeat – the dog has no control over this condition and gets no pleasure or reward from being in this condition.

There is a belief with some people that if you interact with the animal in a positive way such as giving it a pat, or cuddle, or by giving it some food to eat that these acts will encourage the dog to act the same way with every storm as they are being rewarded. To this belief I say RUBBISH!

The dog is already in a panic situation, it is scared, it is very frightened – it needs to be shown love and attention. The acts of kindness do not reward the phobia – they lessen the feeling of anxiousness and fright and in some cases may prevent the dog from getting worse phobic over time and may also prevent the animal from self-harm. I think we all understand that if we know someone who is frightened and very anxious – if we ignore it or if we walk away from the circumstance then that person may self-harm.

We do not know why phobias occur but we do know that the earlier the owner acts to help the animal the less the phobia will develop and in some cases the animal can learn to deal with the phobia and lead a “normal” life.

Can an animal learn to cope during a thunderstorm? The answer is YES but in some cases but it takes a lot of time and effort until this happens. We call that training – Behavioural Modification. The outcome of the training will depend on a lot of factors:

Because storm phobias involve more than noise – there is light stimulus as well as changes in atmospheric pressure – it is one of the most difficult phobias to control and manage without the use of medication.

Coping with the phobia is also important – keeping the animal inside during storm seasons, relocating the pet when problem situations are expected, utilising sound proof rooms can assist and the use of short-term medication to modulate the chemical changes within the brain may also assist the animal to cope better.

If you want to attempt Behavioural Modification then here is a quick summary of the methods;

It is important to do this conditioning in controlled environments with few distractions.

The success of this counterconditioning will depend on the efforts that you put in and these sessions need to be repeated over and over again on a long term basis.

Other ways the owner can assist the animal during a thunderstorm is to try to distract the animal from its surrounding and its own fear. Taking the dog for a walk may assist (I know it may be raining but that is why they make raincoats for people). Playing a loud music tape may assist. Sitting with the dog in a quiet dark area may help. Giving your dog a cuddle and talking to it in a soothing voice may alleviate a lot of the fear.

I have even heard of one person who, when a storm hits the area and their dog becomes fearful, they run into the kitchen, grab some doggy treats and run through the house singing, dancing and throwing treats as they go to distract the animal from the storm. Now I am not sure I would do that (I think my wife would be ringing for the little white coated men to come and take me away) but it works for them and their dog.

I personally find the distraction activity or the cuddle activity works well for most animals – a little understanding and little love goes a long way.

For the animal that lives outside or the owner who is away during the day – I would recommend building a safe area such as a secure dog run in the yard and on the days when thunderstorms are predicted then I would put my dog in there so that it is safe from its own fear.

Even the best of intentions and thorough training will not help some animals if there is a severe thunderstorms and during these periods the use of medications may be of assistance.

This medication can be short term – use when necessary. Or long term such as medication given every day for weeks or months at a time – these medications take 3- 6 weeks to work but they to assist most dogs with long-term phobia.