After spending all her time developing all the other animals and plants of the world she decided that she would have some fun and develop a creature that would remind humans (and other animals) of their status in the world. 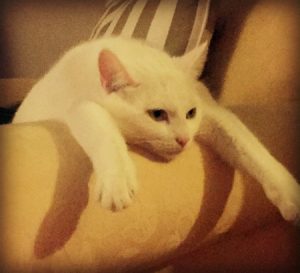 Mother Nature was worried that Man would consider themselves to be the master of the universe – so she developed an animal to forever remind humans that they were not “in charge”. She developed the cat!

I understand that a lot of the public are critical of cats but I happen to enjoy interacting with them and treating them here at East Bundaberg Veterinary hospital. I love their outlook on life, the majestic way they move and their big personal space. (In fact, I enjoy them so much that I decided to get special postgraduate qualifications in the Feline Medicine Field.)

People do not own a cat

A person learns to live in the same household as the cat. If you want the cat to love you – then you must earn that “love”. The cat will decide when it is the appropriate time for a cuddle – and you had better be ready or else!

A cat is a special creature

It is a solitary animal who can live in a group or by itself. It will move from group to group if it feels like it or it will go away and live by itself (quite happily).  In a group of cats, there is no “alpha cat”. If you try to dominate a cat, then the cat will either move away from you or will react in a way to let you know that you have “crossed the line”.

Cats are born to live in a certain area

They do not roam to new areas to develop a home. They do not like change – they like continuity in their life. To know where to live, where to hunt, where to defecate etc. gives them harmony.

Remember this when you are trying to move from one house to another – you may feel excited but the cat is stressed to the eyeballs.

A dog feels the world is their toilet but a cat needs a clean litter tray (they do not like going to the toilet if there is already faeces or urine in the tray – think about how you feel if someone has not flushed the toilet). An owner should have at least one more litter tray then the number of cats (in other words – if you have one cat then have two litter trays).

Such as your bed, or in a cupboard, and they need a safety area to go to when things are getting “at bit tough” (such as a stranger comes to your house) – somewhere to hide.

In the wild, you do not eat your meal at the waterhole (it contaminates the water). So separate their drinking bowl from their eating bowel – by at least a meter. Most cats do not like plastic – they would rather drink from a ceramic bowl or even a stainless steel bowl.

THEY will decide where to drink from – how many owners see their cat drinking from the bath or shower floor, the pot plant outside or even the toilet?

Cats do not taste their food

They have a low number of taste buds, and they smell and feel their food. Their ability to smell is well over 1000 times better than humans and they have a small smell area on the top of their mouth. If the food does not smell or feel “right” then they will not eat it (some cats will starve to death rather than change their diet).