Why does my dog eat poo?

My dog eats its Poo – is that a problem?

It seems like every week or two I am having owners contact me about a “disgusting habit” – their loved furry friend is eating its own poo or eating the poo of other dogs and cats. It is very unusual for a cat owner to see their pet devour a poo – their own or anyone else’s. Nearly all the calls come from dog owners.

There is actually a name for this eating of poo – it is called Coprophagia. 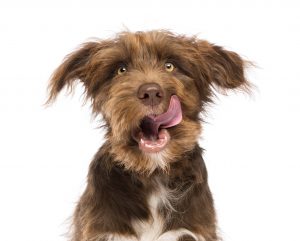 Most owners are concerned that their animal might be deficient in some form of mineral or vitamin and is eating the poo to make up for this deficiency. BUT – studies have been done have shown that most dogs who love munching on a “turd or two” are not deficient but only have a fetish to eat feces (poo).

There are some medical conditions that will predispose to dogs eating poo – digestive enzyme problems, intestinal absorption problems etc. but these dogs are usually losing weight, have diarrhea or very soft motions and show signs of medical problems.

I would certainly recommend that if your dog regularly eats its own poo or eats another dog or cat’s poo that you schedule an appointment with us to get it “checked out” as a precautionary measure.

BUT if your animal is looking good, has a good coat, has normal motions and is not losing weight then there is a good chance your dog does not have a medical problem but has a behavioral problem.

Now I am not going to say that it is pleasant to see your loved animal munching on another animal’s poo and I certainly would not be encouraging my animals to give me “a kiss” after munching on “a floater or two” but in most cases of coprophagia there is no danger to the animal other than getting worms from the poo that it consumes.

I highly recommend that you worm your dog on a regular basis and try to prevent your animal from having access to the poo. That may mean keeping your dog on a leash when walking through the local park or not going places where other animals are let “off lead” and are allowed to defaecate “at will”.

So what attracts your dog to eating poo?

There are lots of theories why a normal dog would eat poo – they range from the dog being attracted to it because of the amount of undigested protein or fat in the poo, to the dog eating it to prevent predators from knowing that there is a dog in the area.

We know that it is normal for a bitch to eat the poo of her puppies and we also know that some puppies will indulge in poo eating as they investigate life and experiment with new things. But most will grow out of the habit within a short time. In some cases the owner inadvertently encourages the puppy by giving it special attention when the pup eats the poo and in so doing they reinforce the problem (using positive reward).

Some dogs will be attracted to poo eating if they themselves are very hungry or underfed or if the poo-maker is being fed a diet high in protein or fat.

It is also believed that dogs who live in an environment where there is inadequate stimulation or inadequate exercise may also turn to coprophagia.

How do you stop your dog eating poo?

The first step in dealing with this problem is to take your dog to the vet and get it checked over and a blood test run to detect internal problems. If the vet finds a problem then this needs to be dealt with in the appropriate manner.

The next obvious way to deal with the problem is to make sure the animal does NOT have access to the poo – easily said than done especially if the dog is eating its own poo. Remember to be 100% consistent with removal of poo from yard before letting dog out.

If you dog eats poo when out walking – get a head halter collar (often called a Halti) and when the dog stops to eat the poo – pull on the leash and give a stern verbal correction, especially when the dog sniffs it.

There are some people who advise that you should paint onto the underside of the stool with some form of irritant (some pet shops have these liquids), but in my experience unless you can pick up every stool and paint the underside and do this for the next few weeks (or months) then this type of aversion therapy does not work. Now personally I do NOT intend going around picking up every poo and painting the underside and then putting them back down again but I am sure there are some owners who are willing to “give it a whirl” – just don’t bite your fingernails afterwards or lick your finger.

You can try changing the diet of the dog and see if that helps – using a more digestible diet or using some enzyme supplements may work (give me a ring if you want to know the name of these supplements or want to get a diet recipe).

Most dogs like the poo to be well formed before they will eat it so adding some vegetable oil or fiber to the diet (Bran) will make the stool more soft (like a cow pat) and some dogs will not eat those.

Overall – assuming your dog does not have a medical problem then eating poo not that harmful to your pet. I would recommend all dogs that eat their own (or another dog’s or cat’s poo) should be examined by a vet and have some blood tests done.

Remember to exercise your dog regularly and try to increase the environment stimulation to keep the animal occupied – give it toys to chew such as the Kong Diet Ball.

And remember – if your dog is a constant poo eater then maybe cut down on the number of kisses and licks you get from the dog after it has been “outside”.