One of my dogs is a very deep sleeper, and often I will catch him in a deep slumber and all of a sudden start yipping and moving his legs like he is running. I have always assumed he is dreaming about something, but because I can’t ask him, I don’t really know what’s going on.  So this week I have done a little searching into the animal brain, and will be discussing “ Do dogs dream?”.

At a structural level, the brains of dogs are quite similar to humans. Tests have also shown than during sleep, the brain wave patterns of dogs are similar to that of people, and go through the same stages of activity seen in dreaming humans, all of which suggests that dogs can indeed dream.

Actually, it would be quite surprising if dogs didn’t dream, as less intelligent animals, such as rats, have been shown to have signs indicating dreaming.  Much of the dreaming humans do is linked to activities engaged in the day. A recent study shows the same thing occurs in rats.  Rats performed a number of activities, such as running a maze, and the brain patterns were recorded. When the rat was asleep, in the same stage of sleep in which humans dream, the same area of the brain would ‘light up’.  As the brain of a dog is more complex, it is reasonable to assume that dogs too can dream. 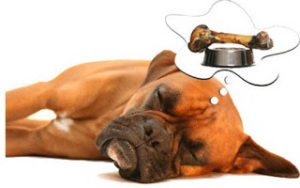 However, you can tell at home quite easily if your dog is dreaming , without resorting to fancy testing.  All you have to do is watch your dog from the time he starts to doze off. As his sleep becomes deeper, you will notice a change in the breathing to more regularly. Around 20 minutes after this he should start dreaming. Usually in the ‘dream state’ your pet will breathe less regularly, and there may be muscle twitches and you may even see your dog’s eyes moving behind its closed lids (rapid eye movement or REM) , just like in humans.  Occasionally your pet may shows signs of daytime activities such as moving his legs like he is running or digging!

So in summary science agrees that our pets most certainly dream. What is my dog dreaming of? Walkies, playing with his sister or chasing birds? We will probably never know, however science says he is likely just recapping whatever he was doing during the day (probably dreaming of digging a giant hole!).