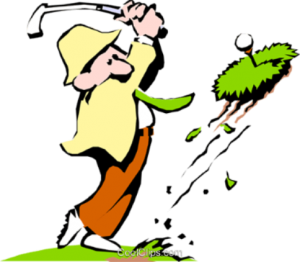 I staggered into the house last Saturday after a long and weary afternoon on the golf course when “Lady and Mistress” (my wife) asked if I had a pleasant afternoon. PLEASANT AFTERNOON! ! ! !

What did she mean? We golfers do not play golf to have a relaxing time and to have fun! We play golf with the same attitude as most armies go to war – we go to defeat our demons and bring peace and harmony to the golfing world. It is a fight between us, our golf clubs, the ball, trees and lakes, bunkers, greens that do not “run true”, the wind and other forces of nature as well as other players and finally the demons that live within us that rear their ugly heads every time we swing a golf club. Golf is the ultimate torture inflicted on ourselves by ourselves. We do NOT have “a pleasant afternoon”! Anyone who has stood, and listened, in the middle of a golf course during a normal amateur competition day will understand that golfers are not “having fun”. The air if full of expletives, the occasional “wack” as a club head is driven into the ground, a lot of groaning and sighing and other sounds as we golfers struggle with the “Golf Gods” who enjoy creating trouble and tribulations to anyone who is silly enough to play this very frustrating sport. We (golfers) also know that the Gods instil into our golf clubs (and our golf balls) the ability to cause havoc and mayhem. In fact golfers are so sure that our clubs know what they have done wrong when the ball disappears into the rough, goes over the fence or takes a swim in the water traps that the only way to get the club to act properly is to inflict flight and pain to the club (in other words – throw the club as far as possible).

Take my friend Fred as an example. Now Fred, Chris, Terry and I were playing a competition on this wonderful golf course (not in Bundaberg) and Fred was not playing well. We had finished 13 holes and Fred had struggled with around 12 of them – playing well over his handicap and he was not enjoying himself (worse than normal). Fred put his ball on the tee on the 14th hole and stood over his ball. He waggled his club, he took a few deep breaths, he flapped his hands from side to side to remove the tension, he shuffled his feet, he twisted his head from side to side to remove any kinks – he was ready. He took his driver and took an almighty backswing twisting his torso around 180 degrees. He then swung his club with an almighty “grunt” with both feet off the ground at the point of impact and his club met the ball at supersonic speed. The ball took off “like a bat out of hell” down the left part of the fairway and then around 100 meters out it suddenly took a sharp turn to right, flew across the whole fairway and headed for the deep rough. The ball collided with a overhanging branch from a tall tree, slammed into the trunk of another tree, careered into a metal sign warning of snakes and with a loud “clang” the ball started its journey back to the tee where Fred was standing with his mouth wide open, his eyes dilated and his hot breath berating the quietness of his other partners. The ball rolled slowly towards our group and came to a halt at the bottom of Fred’s feet. Now Fred is normally a quiet golfer, but his body language spoke more than words could say. He swung his driver (golf club) around his head and without a word – he “chucked” it down the fairway. He then stomped down the fairway – picked up his club and without a word – threw it again. He continued down the fairway and repeated the process another 2 more times.

Then on the last “pick up” of the club – he swung it with all his might. The club twisted gracefully in the air a number of times and finally landed in the course lake – about the middle of the lake. It disappeared from sight with a “plop” and then absolute quietness settled over the course. Fred walked back the group silently. We all stood there feeling very awkwardly until Chris said, “Good throw Fred” and Fred, in his quiet gruff manner said, “Thanks Chris”. Without another word we continued to play the rest of the game. We KNEW that Fred’s club was evil – taken over by the Golf Demons and it was too dangerous to use again, and it would only have infected the other clubs in Fred’s bag and possibly influenced the other clubs in our bags. It needed to be disposed of and we admired the way Fred went about it. It is the way golf legends are formed and the legends grow with each conversation. Well done Fred.